Farewell to The Office: A Final Coming-of-Age 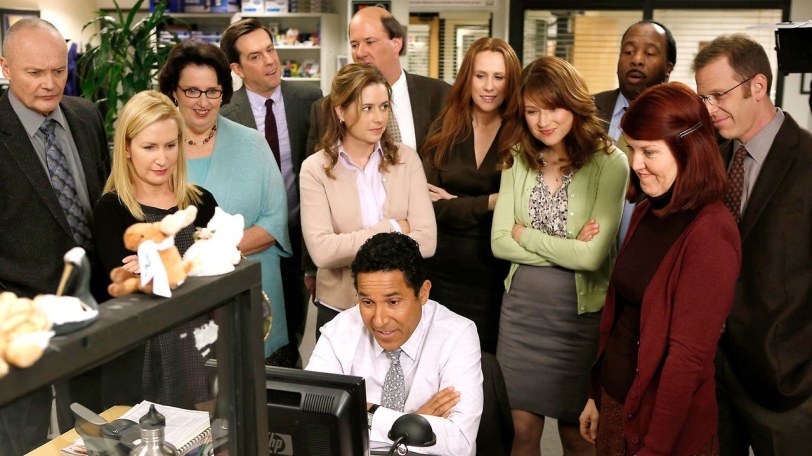 NBC’s The Office ends Thursday, May 16th. For those of us who have followed it through the years, who have grown up and even grown old alongside this show, who have kept at least one eye glued to the television or laptop screen these many, many Thursday nights – it does not feel hyperbolic to say that this farewell, like so many other moments in the series, will be another coming-of-age. Each Spring, we leap together; this Fall, none of us will return.

Seven season finales ago, my online pseudonym was proudgirl. I wish I had a charming back-story for the name, but truthfully, I chose it in my haste to upload Office video creations to Youtube (a site which, in 2006, was still a novelty). Some of these videos may be viewed here, at my once vibrant and now mostly abandoned Youtube channel.

The Office was an amateur video editor’s dream – absent of pesky laugh tracks and episodic music, rich with character micro-expressions and camera movements; it had an ambient rhythm of its own that matched easily to the beats of a song. These videos won’t seem like much now, not with everything in high definition and pores as near as the eye can see. They don’t seem like much in an age where everyone and their grandmother can capture, edit and share a video straight from the palm of their hand. But there was a time when fan cultures lived in separate silos on the Internet, and the idea that you could unite 10,000 people overnight to partake in the same love or interest or weird fascination was an absolute revelation. With the advent of new and integrated social mediums, fan cultures have evolved and converged rapidly over the years. In some ways, fan videos and message boards are relics of the past, harkening back to a time when attention spans were (on average) just a little bit longer, when some things still had to be expressed in full paragraphs, and when technology would not yet permit us to ignore the oxygen we shared with people in the same room.

To me, that’s the spirit of The Office, particularly in its early days. Its British original scrutinized the growing absurdity of cubicles and nine-to-fives, of spending our lives in captivity with people we would never otherwise select. The American version then came and enriched that premise – if every television show is about the search for family, then our American Office reminds us that every connection we forge is bizarre, circumstantial and not entirely within our capacity to choose or refuse. No real family comes exactly as we plan or hope for. People live in captivity in a number of ways, by the very nature of being. Yet somehow – through whatever imagination and distortion possible – we manage to construct families in even the least familial of places.

If the British Office is about tiny portals of light in an otherwise bleak life, the American Office is about small lives considered in large ways – a microcosm under the microscope, where accidental friendships and unintended nonsense reveal how weird and unfathomably hopeful we are as a species. Most lives look small when you don’t peer inside. What makes us cosmic are the little things we do that confirm what is true for many. If a life seems petty or unrelatable, perhaps we haven’t paid attention. The series offered a rather profound perspective – at one level, it unmasked the stupidity of this workplace; at another level, it embraced these inanities as universal to how people cope and thrive in small lives spent in small spaces set in small towns. It found the warmth beneath the banal, and captured a humor both bitingly honest and deeply empathic. The trick is to look closely enough to see the trees, but not so closely that you miss the forest. Meaning, after all, is relative. The American Office believes that sweetness – and significance! – accompanies every strangeness. 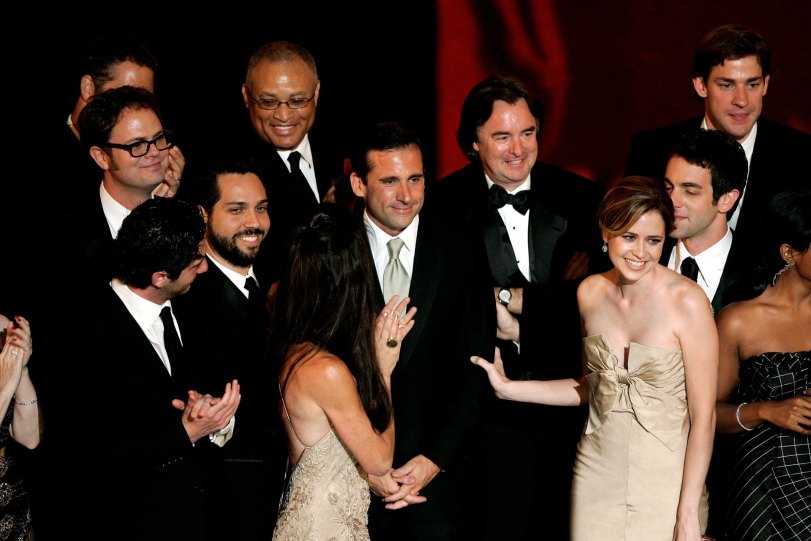 Those who mark the decline of The Office – charting from somewhere in Season 4 and  taking a nose-dive after Steve Carell’s departure in Season 7 – are not wrong in their assessment. It is fair to say that the show’s most glorious contributions – to television, to pop culture and to our lives – are many years behind us. The earlier seasons gave us a comedy free to be more than just comedy – and in doing so, gave us characters we might (save for the celluloid separation) find in our lives and in our offices.

I still remember those meticulous scenes, those finite character quirks, and the voyeur’s glee and guilt we felt in seeing stolen stories unfold through a keyhole. The silent film crew were themselves a character, as we were reminded each time the camera shook and darted behind a bush. Like any real documentary, the narrative lens would always be limited. You never knew what you might be allowed to see, but you also understood that some things would never be seen – the viewer’s frustrated voyeurism was part of the show’s conceit. That sparse, subtle narrative of those early seasons was a rarity in prime-time television, because it was art. Over the years, much of that subtlety and art fell away as we gained unreal access into this world, as the limited single camera became increasingly omniscient. So I understand that – too many on-camera reveals later (TMI) – the ending we celebrate this week is not the beginning we cherished seven, eight years ago. But that is in some ways beside the point. Those who have long since left this show might not remember, or might not have partaken in, what it meant to love The Office seven years ago. Like all keepers of best-kept secrets, we couldn’t wait for the world to find out. The enduring atmosphere of those former days – the uncertainty that inspired a community – made it impossible for me to leave the show in its latter days. As long as it stayed on the air, I would keep tuning in. It’s family, you know? For better and for worse.

It’s family. Few shows merit this term of endearment. If these nine seasons leave us a particular legacy, that legacy lives in the rise and fall of every character, each an empire and anthology unto his/her own. For the series finale, cast members and producers tease a satisfying ending for each of the twenty or so characters in this ensemble. There are some things that only time can earn – for The Office, these nine seasons have earned it a place in our personal histories, so profoundly grafted to who we are, to what we find funny and romantic, to what we expect or hope for as we navigate the nebulous adult world.

This show came to me in my late-teens – in those college years that preceded my first real job, my first real love, and my first real city. I loved The Office precociously, for what it seemed to represent of a world I had not yet matured into – laughing at the strangeness of things I had not yet experienced, weeping for the kind of love I would not yet know. Over the years, as I finished college and survived the job market, as I embarked on new adventures in new cities, as I came to have real coworkers, and as I fell in and out of love – I seemed to also be comparing notes with this little show. Some truths have to be learned at the school of hard knocks – for me, the most profound truth is that sitting five feet away from someone for eight hours a day may as well be kismet. Who knows why we end up spending our lives with the people we spend it with? “Who knows?” I could finally say. “Adulthood is ne-bu-lose.” Some truths, only time can earn. 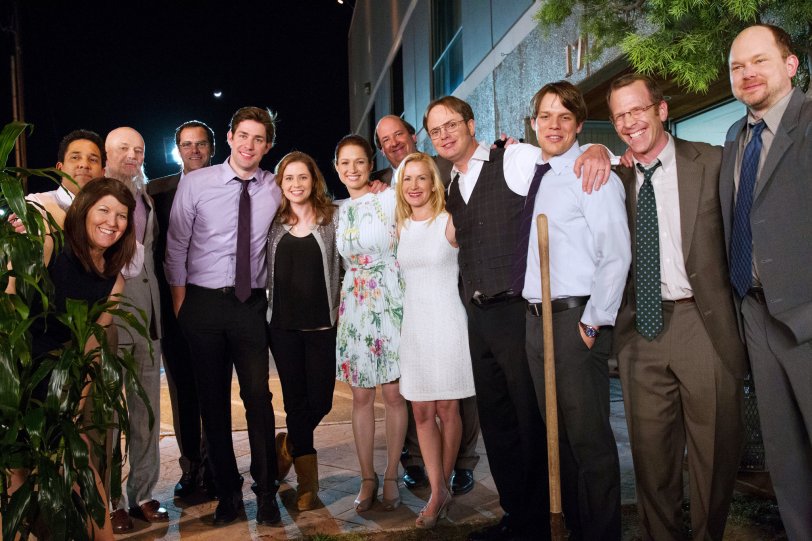 By May 2006, I was convinced that American television had never seen anything like our show. We were now 27 episodes into the series, and anticipating the slightly-extended second season finale – “Casino Night”. These were the days when a small but devoted number of Office aficionados religiously analyzed character developments on the show – congregating at watercoolers like Northern Attack, Give Me My Remote, Television Without Pity, and of course our beloved Office Tally. Every crumb of push and pull between Jim and Pam fueled our gossip (disguised as analyses). Their raw chemistry and understated interaction had become a weekly fixation – as real to us as any of our friends.

The morning of “Casino Night”, I unplugged the Ethernet cable from my laptop and told my roommate, “I don’t want any spoilers.” That evening, my club meeting ran late, and I bounded back up the hill to my Berkeley dorm, where my roommate (and best friend still) had already started watching without me. Our television was a tiny box in her closet, and there we sat – her on her bed and me on the floor, the closet half-open and our eyes fixed to the small screen as Michael Scott juggled two women and Jim went all in (that’s what she said). To this day, I remember my roommate cheering and my shoulders shaking at those hard-earned words penned by Steve Carell: “I’m in love with you.” In that moment, I thought, “He just gambled four years of his life.” Back then, four years seemed so impossibly long to wait, and so incredibly much to lose.

Seven years later, I discover that four years isn’t long but it is much. The Office harbors a history of my past selves; it retains record of my naiveté and unabashed post-pubescence. I am probably not the same proudgirl who risked carpal tunnel to make those videos, and I am probably not the same kid who ran up the hill and back home to my favorite TV show. Those selves are at once endearing and slightly embarrassing to recall. But I might not recall them at all were it not for this quaint, resilient television series. And I might not have realized that, where it counts, I am still the same. (That’s what she…)

So many chapters in my life are inexplicably entwined with moments on this show. As I comb through the seasons – through Phyllis’s wedding, through the introduction of Holly, through the Michael Scott Paper Company, through the birth of Cece Halpert and the fall of David Wallace (Suck It), through the exit of Michael Scott and the entry of Robert California, through Ryan’s many personalities, job titles and hairstyles – I realize that pieces of my adolescence and adulthood belong to this show. In this final week, what I – and our nine-year community – must accept is that after May 16th, our lives will finally part ways with the lives in this office. As the passphrase-protected doors of Dunder-Mifflin close on us, as Dwight’s moon-face and Jim’s final mug bid us farewell, as Stanley’s last scowl and Meredith’s upskirt send us off, we’ll have to decide where to go next. We don’t have to go home, but we can’t stay here.

Here’s to one final coming-of-age. I feel God in this Chili’s tonight.

Yours (one last time),
proudgirl 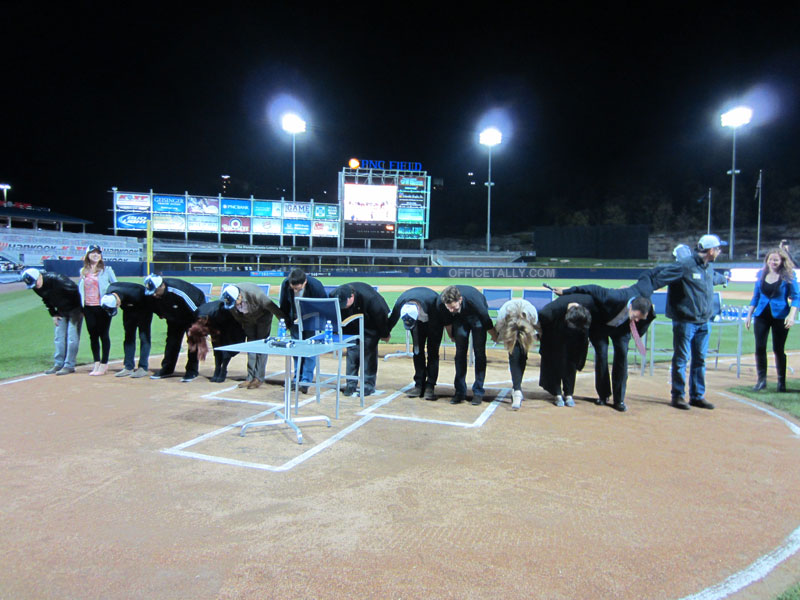 10 thoughts on “Farewell to The Office: A Final Coming-of-Age”